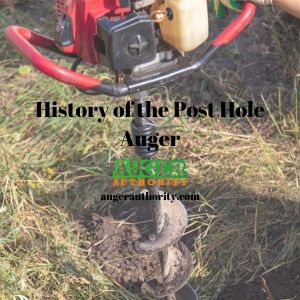 The history of the post hole auger goes back 100’s maybe even thousands of years.  As long as humans needed water and wells and holes, there has been augers to drill them.

Exactly who invented the first post hole clam shell auger is not well known because it happened so long ago.  Let’s take a look at the history of post hole diggers and who came up with the idea for a powered version.

What are Augers Used For?

Augers are used for a ton of things.  Ice fishermen use ice augers to drill holes in the ice all winter long and catch fish.  If you have a foundation, footing, decking or fence to build, you would use a dirt or post hole auger to drill holes into the ground to secure your projects.

Large agricultural augers are called 3 point post augers and are attached to tractors and large machinery.  They drill large wells and/or holes on an industrial scale.

You even use them to bore into trees and collect maple syrup.

A manual auger can come in different styles.  1 style is just a plain old drill bit with a handle at the top that your twist as you drill your hole.

The second kind is a clamshell digger, named that because of the way the 2 bits come together like a clam shell to grab and lift dirt out of your hole.  The blades are sharp, which lets you dig and twist into your hole.

The first known auger type screw wasn’t even used to drill holes.  When was the first auger made? It was invented in Greece around 250 BC to remove water from large ships.

The history of post hole diggers is simple. Necessity is the mother of all invention and this is the case with powered post hole augers.  Where were post hole diggers invented? History has it that a farmer out in Kansas needed to drill a 1,000 post holes to fence in his property and livestock.  Doing this by hand would have been a ridiculous undertaking. So he set about solving his problem with a mechanical post hole digger. When was the first post hole digger made: the mid 1940s.

He later went on to use it to run a side business, drilling post holes for his neighbors at 10 cents a hole.  Smart guy.

There you have it, a brief run down of the history of post hole augers. Check out our reviews of the top post hole diggers on the market and pick yours out today.