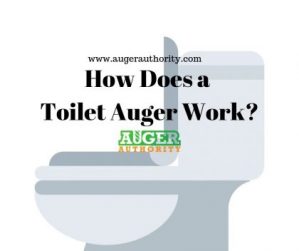 So, how to use a toilet auger to unclog your toilet?

If you’ve tried a plunger and you’re not getting any results you may need to pull out the big guns.  That means using a toilet auger.

Let’s find out how to unclog your toilet!

What is a Toiler Auger? How to Use a Toilet Auger?

What is a toilet auger?  Also called a closet auger, it’s a tool used to specifically unclog toilets. Augers are the best thing to unclog a toilet.

Toilet augers are built as a long vinyl tube with a handle on one end and a long metal cord or cable inside, usually 3 to 6 feet long.  They are built using heavy duty steel construction.  The cable or cord is wider than a drain auger so that it can spin inside and cover the whole diameter of your drain.

They come with a special “head” at the tip, which is shaped like a pear or a bulb.  This head will grab any weird things like toys and pull them right out of the drain.

They are also built with a vinyl covering that protects the porcelain in your toilet bowl from becoming scratched up when spinning the auger. We’ve tested and tested and narrowed down the best toilet augers for you to choose from.

Is a Toilet Auger the same as a Snake?

Auger and a snake are two different tools to unclog drains and toilets.  Auger are tough, long and built to get out even the worst toilet clogs.  Snakes are thin and short, built for removing shallow uncomplicated clogs mostly from drains.

If you’ve got a toilet to unclog, don’t waste your time with a snake.  It won’t go deep enough to get the clogs out of the bends in your pipes.

How to Use a Toilet Auger to Unclog a Toilet

PRO TIP
If you hit the U bends in the pipes, slowly crank your toilet auger while applying pressure to push it through. You should get through after a few cranks of the cable.

How Does a Toilet Auger Work?  Unclogging a Toilet with an Auger

The most common places a toilet gets clogged is in the passageway or the U bend and just after where the toilet joins the floor.

How Does a Toilet Auger Work?  Troubleshooting Guide

If you’re using your tool as instructed and the toilet auger isn’t working to remove the clog, you’re next step would be to drain the toilet bowl and tank and remove the toilet.

You can auger the toilet backwards as a first step.  Second step would be to auger the drain going into the floor.   The longer your auger the better.  Consider purchasing a 6 foot toilet auger instead of a 3 foot model.

Sometimes, your toilet auger isn’t working because the cord is stuck in the bowl.  It can get hung up on the trap or in the U bends on the back of the toilet.

For this, you would slowly crank the cable while pushing the auger into the toilet.  It should work itself through the trap and U bends after a few cranks.

Is Your Toilet Auger Stuck?

There may be a time when your working on a clog and your auger is stuck in the toilet!  This doesn’t happen often, but we thought we’d mention it anyways.

If your auger gets stuck, it’s probably just hung up on a bend in the pipe or the internal trap.  Crank your auger around while pushing it into the pipe, then try to pull it back out.

If that doesn’t work, do the opposite and crank the auger while pulling it out.  One of these methods will usually dislodge your auger from being stuck in your toilet.

Rarely, you will need to remove your toilet and get the auger unstuck from the toilet yourself.

Our technique for getting a toilet auger to go into your toilet pipe is easy to follow.  First, place the auger right up against the pipe in the bowl.  Then, push the auger as far as it will go.

After a minute, wind your toilet auger back up and see if you’ve grabbed the clog.  If not, put the auger back down the pipes and keep slowly spinning until it gets passed the bends in the pipes.

Once you hit your clog, the auger will stop.  Spin the auger to really grab onto that clog or object and then pull it back up.

If all this fails, you may have to remove your toilet.  Thankfully, most clogs are in the U bends in the toilet pipes and you won’t have to go that route.

Can You Use a Toilet Auger on a Sink

No!  Toilet augers for sinks is a bad idea.   And vice versa, you don’t want to use a drain auger or snake on your toilets.

Drain pipes in sinks and bathtubs are approximately 1.5- 2 inches in diameter and toilet pipes are 3-4 inches.  A toilet auger can’t be used on a sink because the cable or cord is much larger than one used for drains.

A thick toilet auger cable doesn’t have enough “free play” to remove clogs from a sink drain. They are also much shorter, being anywhere from 3-6 feet.

Drain augers are 25-50 feet long with thin cables to really reach that grease and hair that you might find in a kitchen or bathtub drain.

How Much Does a Toilet Auger Cost?

How does a toilet auger work to unclog a toilet isn’t rocket science.  All you need is some elbow grease and a strong stomach to work out those nasty toilet clogs!