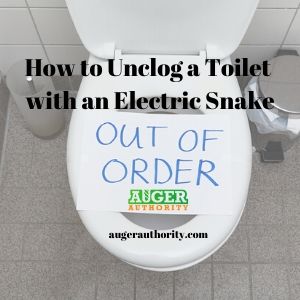 Unclogging a toilet with an electric snake is possible.

Otherwise, we don’t recommend using an electric drain snake to unclog your toilet.  Read on below to see why…

Toilet Auger Vs an Electric Snake

Toilet augers are built with a thicker cable because toilet pipes are usually 4 inches wide.  A thicker cable is needed to clean out the whole pipe.  They are usually also made with a special vinyl cover to keep your toilet bowl from getting scratched.

A toilet auger is retractable into a plastic cover so that you don’t have to touch the cable after its been in the nasty toilet.

An electric snake is usually for drains, which are smaller in diameter.  The crank cable is much thinner than a toilet auger.  They can be powered with a cordless drill or you crank them by hand.

Electric drain snakes are usually 25 feet long, where a toilet auger is 3-6 feet long.  They also don’t have a protective vinyl cover and they retract into a drum instead of a long plastic cover.

There are two types of electric snakes: a drum auger where you attach a cordless drill and a drain auger with a motor that controls the speed of the cable.

How to Unclog a Toilet with an Electric Snake

As mentioned, an electric drain auger is one of the more popular types of auger and are used to unclog drains in your kitchen, bathroom, etc.  If you’re toilet is clogged, you might wonder can you put a drain snake down the toilet?

You don’t have to do much research to learn that using a power snake for a toilet is not recommended.  Why not?  A power snake isn’t good for using on a clogged toilet because:

Maybe your toiler is clogged and you’re desperate.  Maybe you have 5 people in your house and 1 toilet.  You could have guests coming over soon.  Also, you might not have cash on hand to go out and buy a toilet auger.  Plumbers are expensive so maybe calling one right now isn’t in the budget.

Using an electric drain auger on your toilet is possible, but we stress that it’s definitely NOT recommended.

PRO TIP
Before storing your auger, apply General Wire Snake Oil to your cable after you’ve cleaned it. This stops rust and keeps your cable from getting stiff and kinking while it’s in storage.

How to Unclog a Toilet with an Electric Snake: Step by Step

Instead of hiring a professional plumber, you may be able to take care of the clog on your own, which saves you a lot of time and money. By following these simple steps, you can use an electric drain auger to your advantage.

Understand the warnings though, that you might scratch your toilet bowl up and this is only a temporary solution because they cable is probably too thin to get out ALL the clog.

First thing is first when working with toilets.  You need to get yourself some long gloves, goggles and put on your work clothes (make sure they aren’t loose).

Also, grab yourself a garbage can or bag.  This is to put your drain snake in after you’ve unclogged your toilet. You don’t want any drips getting onto anything in your bathroom.  Make sure you’ve got disinfectant or bleach for clean up after your toilet is running clear.

The very first step is to make sure you prepare yourself and the drain. In addition, you’ll want to make sure that you’re wearing long gloves as whatever is causing the clog shouldn’t touch your skin.

If you’re using a cordless drill attachment with your auger, you will want to make sure the batteries are charged and that you attach it to your auger drum.

An electric snake with a motor will either need to be plugged in or you have to charge its’ batteries before you use it.

Step 2: Inserting the Electric Snake: Avoid that ONE Mistake

Next, you’re going to want to insert your drain auger.  Be careful here.  Your electric snake cable might scratch your porcelain toilet bowl if you’re not super cautious.  Hand feeding the cable directly into the toilet bowl opening right at the beginning is key here.

Remember that the only way to fix scratches in your toilet bowl is to replace your toilet so treat lightly here.

Using a cordless drill attachment on the top of the electric snake, begin to pull the trigger on the drill, slowly at first, which will feed the cable into the drain. Use a bit of force to get it down the drain.

Once you start to feel resistance, then you’ve reached your clog.  At this point, you will want to continue pulling the trigger, as this will push the auger through the trapped debris and the rotating cable will grab anything large.

An electric power snake works the same as an auger with a cordless drill attachment except you power the auger with a foot pedal or trigger.  The cable then auto feeds down your toilet pipe.

Once your don’t feel any more resistance on your cable, you can then reverse your auger to retract the auger cable from the drain.

It’s time to flush the toilet to see if the issue has been resolved. It’s highly likely water will begin to drain perfectly again, which means that you have removed the clog.

In the event that the clog isn’t removed, it could be clogged further down the pipe than you expected. At this point, you may have to either remove your toilet or call in a plumber.

Take your electric snake or drum auger outside for cleaning.  Unwind the cord and wash it down with disinfectant or bleach.  After all, it’s been in your toilet and there is nasty stuff down there that can make people sick.  You don’t want to put that cable near your sinks until its totally disinfected.

How to unclog a toilet with an electric snake is simple and fast, but we recommend you use a toilet auger for the job.  They are built with thick cables and special vinyl guards to protect your toilet bowl from getting scratched.

Check out the Best Toilet Auger