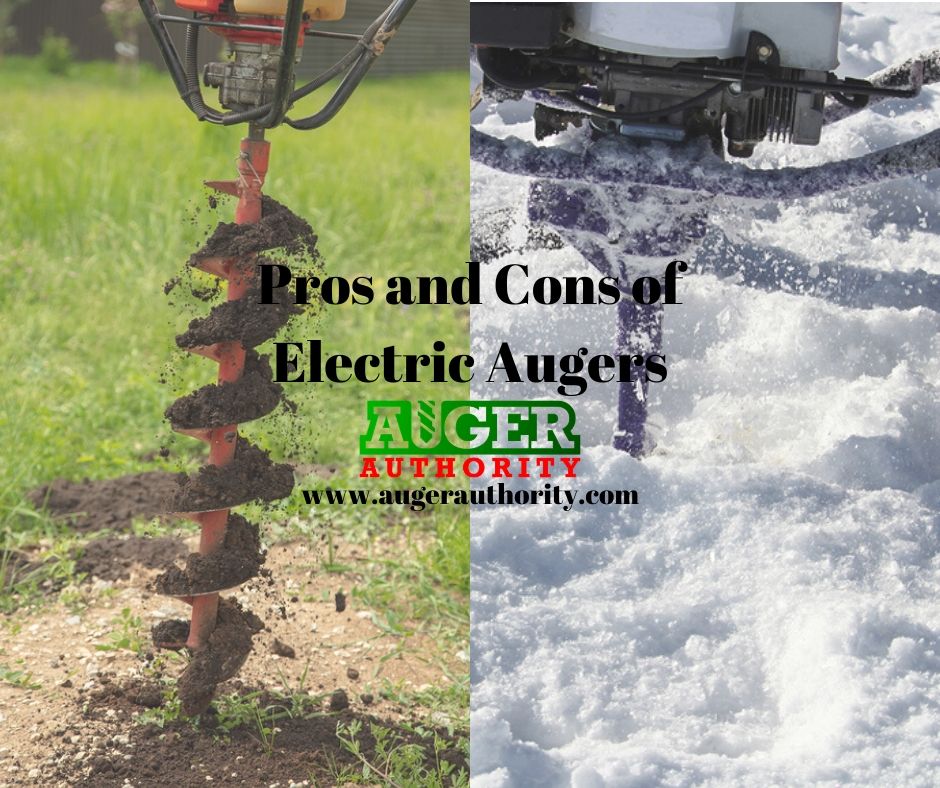 Before jumping into such a big purchase, you should check out the pros and cons of electric augers.

This way you can decide if going electric is the right route for you.  Maybe a gas, propane or even a manual auger is better for the type of projects you'll be working on.

Whichever type you choose, take a look at the pros and cons of electric augers below to help you make your decision.

I get commissions for purchases made through links in this post.

An electric auger is one of the most convenient options for drilling post holes and ice fishing. There is far more to these tools than convenience, which is what makes them as popular as they are. Each type of auger has its pros and cons and a few of the most important Pros of an electric auger include:

Gas and propane augers can be more difficult for beginners or maybe folks with previous injuries to handle because of the extra torque and power.  Electric augers can still drill a ton of holes, but don't have as much torque as their gas powered cousins.  This means they are easier to use and handle.

Instead of struggling while using a tool designed for your convenience, it can be better to opt for the more stable option, especially if it’s your first time using one.

Manual augers are the most stable of all the augers, but that means your going to need a ton of elbow grease to get through the ice.  And anything other than easy soil conditions?  Forget about it, you will need a powered post auger for that.

Gas and propane burn fuel and emit carbon dioxide.  This means you can't use them inside an ice shanty. Not only will you put out harmful emissions into the atmosphere, but you’re also exposing yourself to toxic chemicals.

Gas augers put out a ton of fumes compared to electric augers, which create zero emissions.  Electric augers use batteries to drill holes. There’s no messy fuels that smell terrible and produce exhaust.  Next to manual augers, electric augers are the cleanest option for drilling fish holes or post holes.

If you plan on drilling for fish in your ice shanty, an electric auger is the way to go.  You’ll not only be protecting yourself, but also the environment.

If you’re environmentally-conscious, you’ll see no other choice other than an electric or manual auger.

Not only are electric augers designed to be the second-most lightweight option (next to manual augers), but they reduce the amount of money you have to put into your fishing expeditions.

You don’t have to worry about buying and carrying a ton of gear with you when you go fishing, such as jerry cans, fuel mix, oil and extra propane tanks.  Also, you can ditch all the spare parts and tools, and just take a spare battery.

Their easy-to-use functions make them a great choice for beginners and veterans alike.  You’re also sure to appreciate their more high-tech features.

Electric augers are equipped with lithium-ion batteries, which are known to hold plenty of charge and last over hours of continuous hole drilling.

When you’re headed out on a fishing trip, or starting a drilling job,  you’re going to want to ensure your auger won’t run out of charge before you make enough holes.

On average, lithium-ion batteries can take several hours to charge, especially if they’re powering heavy-duty equipment such as an ice auger.  Once they have fully charged, though, they’ll power the device for several hours without needing to switch them out or recharge them.

Each make and model of electric auger is different, some can drill more holes than others on a single charge, so make sure to check with the manufacturer.

If you intend on taking an overnight trip to your favorite fishing hole, it’s recommended you charge up and bring spare batteries.

Manual augers require no batteries or fuel: all they need is human power to drill holes.  Downside is all the energy it takes to drill holes can cut your job or ice fishing trip short.

Electric augers are known for being lightweight and portable, even with the added weight of a battery or two.  Of course manual augers are the lightest choice of them all, with no engine, fuel, or batteries to weigh you down.

Electric augers are light enough to give you the ability to carry it to your ice fishing hole or your backyard.

Most electric augers now weigh approximately 40% less than gas augers, which is ideal for people who want to pack as light as possible.  The last thing you want to to become tired just from dragging your auger out on the lake on your sled.

When you take out the need for gas, you’re also removing all the parts needed to operate a gas auger like the tank full of gas, carbs, etc etc.

A major concern for gas auger users is that getting the unit started is more difficult than you might anticipate, especially if it’s an older auger.

You have to ensure there is enough gas in the tank as well as oil all in addition to cranking it several times until it starts up.

All of this can be avoided when you opt for an electric auger.

With access to on-demand power, you won’t have to worry about extreme cold affecting the inner components of the engine nor will you have to wait several times for the tool to start working.

Depending on your model, you likely have to push a single button and it starts up in a matter of seconds.

Another important feature of this is that you can use it consistently without leaving an idle engine running.

You’ll more than likely need to drill several holes in the same area and instead of leaving the auger running, burning gas and posing a safety risk, you can start and stop the tool with the power button.

Like any fisher, you know how important it is not to scare your catch away; otherwise, you’ll be spending more time than necessary waiting for a bite.  Although electric augers aren’t completely silent, they are far less noisy than their gas counterparts.

When using an electric auger for post holes, their quiet operation will be a blessing if you've got crabby neighbors that hate noise!

You’ll also find that you enjoy the quiet operation an electric auger provides.

Basic maintenance on an electric auger is super affordable.  You don't have to worry about stabilizing fuel, fuel lines, cleaning out the carbs, perfect gas to oil ratios or any leaking.

You will have to pay attention to not only making sure your batteries are charged before you use it, but checking the health of the battery itself.

Batteries are not cheap so we advise you to store the batteries indoors, or in a heated storage area to make sure they keep their charge and don't decay due to cold and dampness.

Every tool has pros and cons.  Although electric augers seem to be the cure-all solution to your ice fishing or post holes problems, they still do have a few cons:

At this point, an auger drill operating with gas will outlast the majority of electric augers, especially when it comes to drilling multiple post holes or chasing fish through thick ice.

Batteries are going to be used up at a far faster pace than gas, but as technology advances, the gap between the two is getting smaller.

With overnight stays while ice fishing, we recommend bringing an extra battery and somehow keeping that battery warm so it keeps its' charge.

With a gas auger, all you have to do is bring extra gasoline and maybe fuel mix.  Since your gas auger won’t go through your entire tank in one day, they can be a more convenient solution if you're slicing through thick ice all day.

Same goes for post holes.  If you're drilling through tough soil and/or drilling deep holes with an extension, an electric auger probably can't drill as many holes as a gas or propane powered auger.

Electric augers may not have as much power as gas or propane augers.  They just generate more torque to power through thick ice or touch soil conditions.

Head to head a gas powered auger will always be able to drill more holes on a tank of gas than an electric auger on a battery charge.

If you know you'll be drilling post holes in touch conditions or chasing fish in deep ice, opt for a gas powered auger.

With all of the points about power taken into consideration, the cost of an electric auger drill is about the same as a gas or propane powered auger of the same quality.

If you’re budget-conscious, opting for gas may be a better alternative but think about the type of soil you'll be working in or your favorite ice fishing area first.  If it's going to be deep ice/rough soil, an electric auger won;t be tough enough to get through your job.

You will also want to think about the cost of batteries versus the cost of gas too.  With an electric model you should have 2 batteries minimum on hand and they aren't cheap.

But, with a gas model, you are always having to buy more gas and do more maintenance on all the moving parts in the engine.

Now that you've got the pros and cons of electric augers outlined above you can pick either electric, gas or a manual auger.

This site uses Akismet to reduce spam. Learn how your comment data is processed.