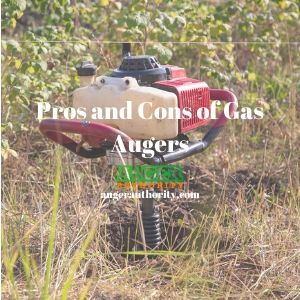 Before dropping your hard earned cash, you should know the pros and cons of gas augers.

Read our quick chart and list below to get an idea if a gas powered auger is the best choice for you.  Maybe an electric, manual or propane auger would work better?

Check out our post below and decide for yourself.

There are many reasons why gas augers are popular.  They are convenient, and have plenty of advantages over other types of augers.  Whether you’re ice fishing or digging post holes, these pros are for all gas augers.

Pros of a Gas Auger : 3 Pros to Consider

When compared to using a hand auger, it’s always easier to rely on a powered auger, which is why many people prefer gas powered augers. This is especially true for ice fishermen, who have to dig upwards of 20 holes per fishing trip in sheets of ice as thick as two feet.

The horsepower of a gas auger is also what makes it ideal when compared to electric augers, as the gas-powered ones pack a more powerful punch.

Gas augers are awesome at drilling post holes too.  They have the power to chew through roots and tougher soil than you can with an electric or manual auger.

It’s true when they say older tools were built to last longer than newer ones. In new models, such as electric augers, there are more high-tech parts that could fail.

Those parts won’t be repairable by hand in your shop, like a gas auger.  If you have an issue, you can just clean out your carburetor, put in a new spark plug etc.

Gas augers are simply designed using technology that’s existed for decades.  If something goes wrong with your gas auger, chances are you can fix it yourself.  This won’t be the case with an electric auger.

The longest lasting augers are manual augers; you only have to worry about the shape and sharpness of your blade instead of all the moving parts of gas augers.

We all know that gas augers are superior in terms of power because they rely on a motor instead of a battery, which leads to their efficiency.

Overall, with more torque at your disposal, drilling an extensive number of holes will take far less time with a gas auger than with an electric or manual model.

However, this is also what makes gas augers more dangerous than electric or manual ones. There are several benefits to having a gas auger, but you should also consider if you can live with the cons.

Known for their power and efficiency, gas augers have mostly been referred to as the superior option. Nevertheless, there are a few cons of a gas ice auger which could put a damper on your fishing excursion. These hassles also apply to gas augers used for digging post holes.

Cons of a Gas Auger : 4 Cons to Consider

If you get a two-stroke auger, you’re going to need to know the perfect mixture of gas and oil every time you refill the tool. You’ll have to either bring pre-mixed fuel, buy special pre-mixed fuel or bring the gas and oil and measure them out.

This is time-consuming and takes more effort than electric, manual or propane augers. Especially for beginners, you’ll need to take time to learn the perfect fuel-to-oil ratio to operate your auger.

Ice fishermen typically use a fishing shack or ice shanty to shield them from the elements and to keep you more comfortable when you’re outdoors.

When you’re working in your shack, you’re not going to want to fill the entire space with hazardous emissions, such as carbon monoxide.

You’re exposing yourself to toxic deadly gases.  An electric or manual auger is a better choice if you’re going to be using an ice shanty or shack.

Even when you’re drilling post holes, eco-conscious people may also want to consider an alternative to a gas augers, to stop putting the emissions into the atmosphere. With manual or electric models, there are zero emissions.

There are many heavy-duty parts included with a gas auger including the motor and fuel tank, which are only going to add weight to a tool that’s already heavy.

It’s likely you won’t be able to drive up to your favorite fishing spot and instead, have to pull the auger behind you on your sled.

You’ll also need to bring a jerry can of fuel, some gas-oil mixture and anything else you think might need. This all adds to the weight on your sled.

They’re certainly not recommended for people who are looking for a lightweight and portable item to use consistently.  Electric augers weigh less than gas augers.  The lightest augers are manual augers, without engines or batteries, you don’t even need to bring spare parts.

You’ll also find that gas augers take far more energy to use, as they create a huge amount of torque that you will need to control.

Having to lift the heavy tool, turn it on, dig a hole, and then place it down again, creates a lot of unnecessary strain. If it was more lightweight, it would be easier to use to your advantage.

It’s possible that the first time you crank your auger to get it working, it’s not going to turn on. This could be because of an improper mixture of gas and oil or it could be that it needs to be primed prior to starting it up.

If it’s cold out, which is obviously the case when ice fishing, your electric, gas or propane auger will have issues getting started.  Regardless, this is an extra step you’ll have to do in order to prepare the auger to be used.

Now that you know the pros and cons of gas augers your able to make a decision if that type of auger is the best for your fishing or hole digging.

Check out the Best Gas Auger