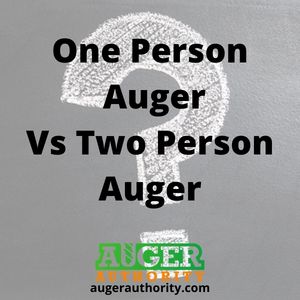 Should you use a one man auger vs a two man auger for your next drilling job?

We solve this problem and help you choose in our post below.

One man augers are designed to be used by one person.  They are built with lighter parts and typically the holes they drill may be smaller in diameter than a 2 man auger.

A one man auger will have smaller handlebars meant to be used by 1 person and be less powerful than a 2 man auger.

One man augers are built with a reverse function so the drill bit will reverse out of the hole, bringing out any soil with it.

2 man augers will have two sets of handlebars: one set for each person.  They tend to be designed for more heavy duty work such as drilling through heavy solid, thick with roots and rocks.   Our top pick after testing for a 2 person or “Dually” post hole digger is the Earthquake Auger.

Some of them don’t come with a reverse function, meaning you and your work buddy will have to manually pull the auger machine from the hole you’ve just drilled in the ground.

You will also have to take out the extra soil to keep the auger from getting stuck.

Choosing between a one man auger vs a two man auger is an easy choice once you know the capabilities of each auger and what they can do for you.