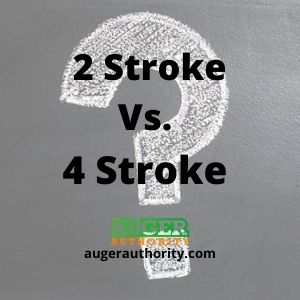 Two types of gas augers exist and ice fishers debate which is best a 2 stroke vs a 4 stroke ice auger?

We review the pros and cons of each below so you can make the best choice for your ice fishing.

2 Stroke vs 4 Stroke: Which is Best for You?

The best ice auger is the one that works for you and what you need out of your auger. We personally prefer a 4 stroke even though they cost more. That’s because 4 strokes are quieter. They have more torque throughout the RPM range. The engines also last longer than a 2 stroke. So which one is the best for you and your next ice fishing outing? Well, it all comes down to personal preference and budget.

2 Stroke Pros and Cons: Are 2 Strokes better than 4 Strokes?

Let’s talk about the Pros and Cons of a 2 stroke Ice Auger.

This is because of #5. 2 strokes are more powerful and run at higher RPM’s so the parts are working faster than a 4 stroke. More RPM’s equals less engine life.

#2. Expensive (and Messy) to Premix Oil/Gas

No one likes mixing oil/gas or paying a premium for the premixed stuff. It’s expensive, smelly, and inconvenient.

2 strokes use more fuel than 4 strokes. For every piston stroke there is fuel released, versus a 4 stroke where fuel is released 1 time for every 4 strokes.

2 strokes have a specific sound that is loud and grating to the ears. If you want to avoid annoying sounds like that, get yourself a 4 stroke.

Using more fuel, plus the mixing of oil and gas means than 2 strokes emit more smoke that you can see and smell. Oil is released as the fuel is burnt, which you can also smell in the exhaust.

2 strokes run at higher RPM’s than 4 strokes. You can tell be the high pitched noise that 2 strokes make compared to 4 strokes. 2 strokes are more powerful because power is released for every 2 stroke of the piston.

Less parts means if something goes wrong while you’re out ice fishing, chances are your auger can be repaired on the spot with the tools you have on hand. It also means that the repairs will likely take less time as well.

Less parts means a 2 stroke is lighter and easier to carry/use than a 4 stroke.

4 strokes last longer due to their build. This means they are always more expensive than a 2 stroke.

No messy spills, no buying premixed oil/gas. 4 strokes don’t require premixing of oil and gas. Just like a care engine, the oil has its own separate reservoir.

Buying a quieter auger might be a smart thing to do if you’re ice fishing. 2 strokes have that specific pitched sound that is much louder than a 4 stroke. After drilling a few holes, it can become annoying.

4 strokes have more moving parts so naturally, manufacturers charge more. Also, because they last longer, they are at a premium.

4 strokes release power once every 4 strokes of the piston compared to a 2 stroke that releases power every 2 strokes (or twice as often). While a 2 stroke isn’t twice as powerful as a 4 stroke, there is a notable difference. If you’re looking specifically for a powerful ice auger, a 2 stroke may be for you.

4 strokes have valves and all of the trappings of a long lasting engine. More moving parts means they are heavier and repairs are more expensive. Could be difficult to repair out on the lake if something goes wrong. However, you have to consider that they are long lasting and perhaps more reliable, so engine breakdown may not be a concern for you.

Travelling long distances with your ice auger on a snowmobile, pulling it behind you on a sled, or walking across a frozen lake may stop you from buying a 4 stroke because they are heavier than 2 strokes. Depending on the kind of ice fishing you do, you have to decide if the added weight of a 4 stroke is a trade off for reliability and engine longevity.

2 stroke vs 4 stroke and the choice you make between the two all depends on how you ice fish and what sort of pros and cons break the deal. Check out out best ice auger reviews to find the ice auger that’s perfect for you this season.