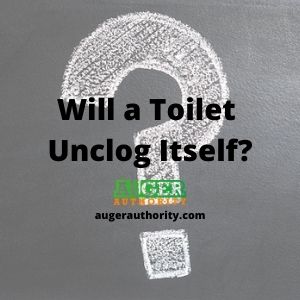 Will a toilet unclog itself? So you’re toilet is clogged and it’s the middle of the night.  You’re tired and your alarm doesn’t go off for hours.  The last thing you want to do is start plunging your toilet or using a toilet auger.

That might have you thinking of Plan B: Will a toilet unclog itself???

If you wait long enough, will the clog just dissolve and your nasty problem go away on its’ own?  Read on to find out if your toilet will unclog itself.

Most people think that once a toilet is clogged that they have to plunge their toilet right away to remove the clog.  You’ll be surprised to learn that the opposite is true!  Will a Clogged Toilet Eventually Unclog Itself?  Will a toilet unclog itself overnight?

Well, yes and no.  Most likely, you’ve plugged your toilet with organic material like poop and toilet paper.

Will Toilet Paper Dissolve in a Clogged Toilet?

Organic material, especially your toilet paper, can start to dissolve because of the water in your pipes.  This will give enough space for the water to move around the next time you flush, unclogging your pipes with the pressure from the flush.  Also, making sure you have a full bowl of water in your toilet can put enough weight on the clog that it may begin to move down the pipes.

Does a toilet unclog itself?  Sometimes yes, but this isn’t a long term solution to clogging issues.   If you need to use your toilet right away, or only have one bathroom, you’ll need a plunger or a toilet auger to clear the clog.

Random clogs are a tell tale sign that there is build up in your pipes that is trapping anything you flush down your toilet.

The best way to remove that build up of gunk inside your pipes is to use a toilet auger.  A toilet auger had a metal bulb head on it attached to a sturdy, but bendable, metal cord.  When you spin the toilet augers bulb head and metal cord, it traps and removes years worth of gunk that’s built up on the sides and in the bends of your pipes.

Will a toilet unclog itself is a common question.  We hope that you now understand that a toilet can unclog itself, but a permanent solution to your problem is to use a toilet auger to clean out your pipes.