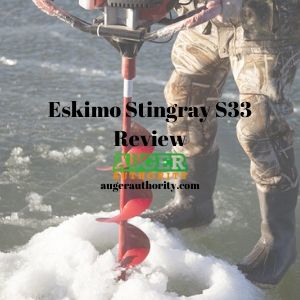 I get commissions from qualifying links in this post.

When you’re ice fishing, you COULD bring a hand auger because it’s lightweight and requires almost zero maintenance.  It’s easier to carry and not too bulky, but if you want something that is stronger, faster, and can slice through ice with no effort, the Eskimo Stingray S33 is for you.  ​

t’s powered by a 33cc engine, giving you enough power to chase fish all day long without tiring you out.

Eskimo is one of the most popular manufacturers of high-quality augers in the market. The augers they make are long lasting and great quality. The Eskimo Stingray 33 is one of their best models and we love that it’s also one of the cheapest.

The Eskimo Stingray 8 inch ice auger is definitely a powerhouse when it comes to ice fishing. If you want to drill multiple holes to chase fish, its 33cc Viper engine is fast and easy to use, even for beginners. The Quantum blades are super sharp, cutting through ice like butter.

When it comes to stability, the Eskimo Stingray 33cc 8'' Power Auger provides a wide range of features to allow you to use the power auger easily. It has steel handlebars to stabilize the power auger when using it and the handles don’t put a lot of stress on your hands.

What We Love About this Eskimo Stingray Auger

The Eskimo Stingray s33 comes with foam-covered steel handlebars that absorb vibration while you’re using it. This model also has mitten-grip recoil which would allow you to start the engine even while wearing thick gloves or mittens. It also has a primer button to help you start the engine quickly.

We love that this auger comes with a see-through gas tank to help you quickly eye ball the amount of fuel left. This also helps you to make sure that the auger is fully drained when you store it.

This model also comes with a muffler guard which will protect you and your clothing from hot areas. Additionally, there is a fingertip throttle trigger to help you control the power of the auger.

The unit is convenient to use because of its wide-wing tubular steel hand bars. This hand bar helps stabilize the unit while you’re using it and helps to maximize control. This also prevents you from losing control of the auger while drilling.

Features of the Eskimo Stingray

These are the things you would expect from the Eskimo Stingray S33 Power Ice Auger:.

The Viper 33cc two-cycle engine is the perfect choice if you are an ice fishing enthusiast. When you’re ice fishing, you don’t need a powerful engine since it might break the ice instead of just putting a hole in it.

With the 33cc Viper engine, you can cut through the ice without using a ton of effort.  It also performs great during cold weather so you won’t have a hard time starting the engine.

Eskimo Stingray quantum ice auger blades are top of the line for bits. The drill bit on the Stingray is a combination of shaving and chipping blades, which will slice through the ice easily.

The auger comes with a blade protector, which should be placed on the blades when they’re not in use to prevent them from becoming dull, provide protection to the blades when storing your auger, and stop accidental cuts.

Comparison with Another Ice Auger

When it comes to value and features, the Eskimo Stingray S33 is your best option because the price awesome and it provides the primary features you need to drill through the ice. However, it’s not always a good choice for everyone.

Most people have specific needs when it comes to power augers, so if you want to check another model which can provide almost the same features, you can check the Ion X 40V.

This is an electric ice auger. It doesn’t produce exhaust and it makes less noise compared to the Stingray, which is a gas-powered auger. Ion X 40V electric auger also weighs less since you don’t have to include fuel. This model comes with a two-amp lithium battery and a charger.

However, the drawbacks are the battery and the cost. You will need extra batteries if you plan to bring it on a long hike. If you run out of batteries along the way, there is no way for you to recharge in the middle of nowhere.

Electric augers like Ion typically cost more than gas powered augers.  When you also have to buy extra batteries, those costs can really add up.

If you are planning to get an Eskimo Stingray S33, make sure you completely understand how it works as well as know the features it provides.

It’s affordable, powerful, and easy to use, so ice fishing enthusiasts love to use this particular power auger. If you want something that won’t break the bank, the Eskimo Stingray is a good pick.